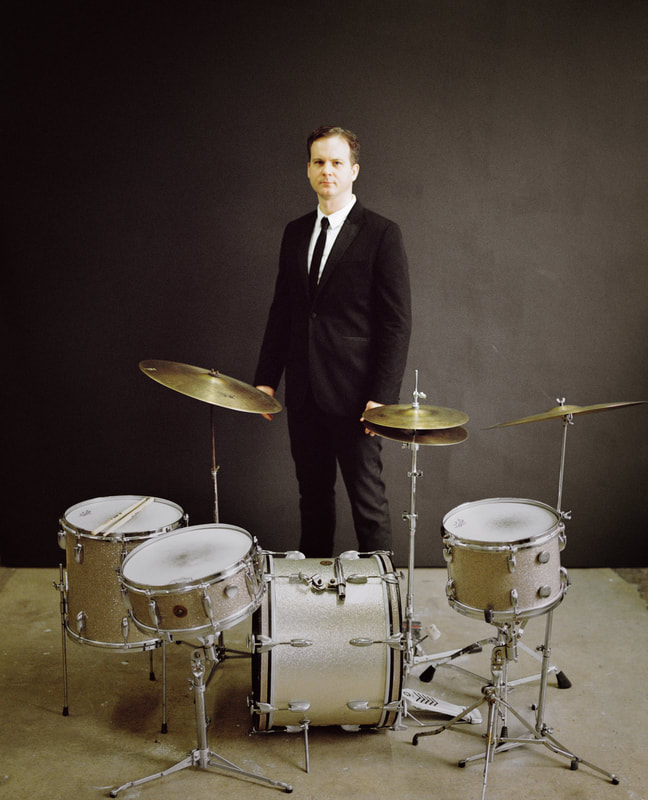 Stockton Helbing is always moving.  If he is not playing the drums he is busy being a composer, arranger, producer, bandleader, educator, music director, author, and entrepreneur.
Stockton maintains a busy schedule of performing, recording, and teaching around North America with his trio, quartet, quintet, and sextet. He is a frequent guest artist at colleges and high schools where he clinics, rehearses, and performs with their small groups, big bands, and percussion ensembles. Since 2011, Stockton has been heard across the United States playing drums for American music icon and trumpet player extraordinaire Doc Severinsen.
Stockton has released seven albums to date:  Lodestar (2005), For Nothing is Secret (2007), Battlestations & Escape Plans (2010), Crazy Aquarius (2012), Handprints (2014), Patina (2015), and Swimming in Place (2017), his most recent.  Each album showcases not only Stockton’s drumming abilities, but his composing, arranging, and producing skills as well. Stockton has also authored two books, Big Band Drum Set Sight Reading Etudes Volume 1 and Studies in Syncopation, both of which are included in the percussion curriculum at the University of North Texas.

Since 2016, Stockton has directed a Jazz masterclass and small group program called the Helbing Jazz Initiative (HJI). Through a close partnership with the music company Williamson Music 1st, Stockton and his sextet have provided Jazz masterclasses for thousands of elementary, middle school, and high school students throughout the Dallas/Ft. Worth Area. HJI masterclasses focus on celebrating the Jazz masters of the past through performance and discussion of their musical and social contributions to Jazz history. In April of 2019, Stockton was recognized by the Dallas Jazz Appreciation Month (DJAM) Jazz Legend award for Jazz Innovator of the year for his work with HJI in the Dallas/Ft. Worth area.